The Problem: The United States needs to produce more STEM teachers and graduates in STEM majors, as well as generate greater interest in STEM among women, minorities, and underserved students.

An Underused Resource: Aviation is an engaging topic, and small airports are intrinsically STEM-rich environments.

A Solution: While many initiatives are attempting to arrest the nation’s freefalling STEM education system, aviation-themed outreach can provide a ready solution not only to the national STEM problem, but also to the projected workforce needs of the aviation and aerospace sectors. 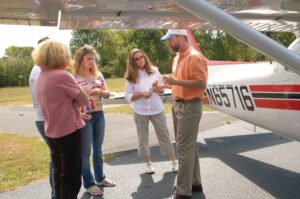 Rich has since collaborated with Linda and other stakeholders on numerous STEM grants, papers, and programs. Drawing on his career as an award-winning flight instructor and early work as a mechanical engineer, Rich has created a range of aviation-themed content and delivered aviation-themed programs in New Jersey, Idaho, Montana, and Oregon.

Over several days, teachers and librarians learned how to incorporate aviation-themed activities into their in- and after-school programs. 2018 iSTEM Institute, North Idaho College.

In 2016, Rich received the Idaho West Central Mountain STEM Gem of the Year award. As a 4-H STEM Program Leader, he received both the Valley County and Idaho Southern District Distinguished Leader awards in 2019. Also in 2019, he was invited to speak about “STEM through the Lens of Aviation” at the Western Regional Space Grant Meeting in Big Sky, MT. In 2020, Rich was part of a team that won the Excellence in Workforce Development award from the National Association of Extension 4-H Agents (NAE4-HA) for programs to inspire future aviation professionals. The team included 4-H coordinators and airport stakeholders in Idaho and Oregon. From October 2019 to October 2021, he was certified by the Partnerships in Education and Resilience (PEAR) Institute to assess the quality of STEM programs in Idaho using the PEAR Dimensions of Success rubric.