Rich is available for training here sporadically during the winter months 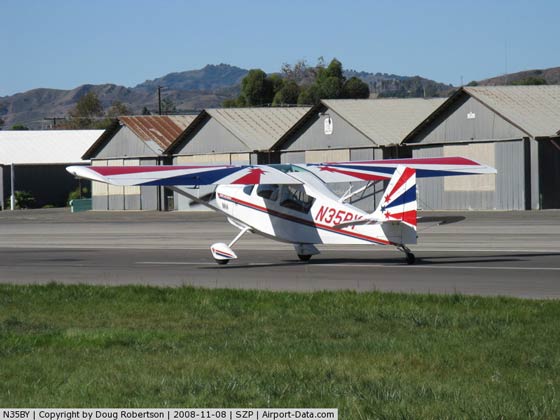 ANTIQUE AIRPLANE CAPITOL OF THE WORLD!
Do you enjoy kickin’ tires at small airports? Then you’ll love strolling along Santa Paula’s ramp…

How to Get Here
By Commercial Airline — Check for flights into LAX, Burbank, Santa Barbara, & Oxnard Airports.

By Small Airplane — see the Pilot’s Guide below as well as the NOTAM about the aerobatic area East of SZP.

Check TFR’s and other airspace issues

For information only, not for navigational or cross country planning purposes.

What is the extent of the aerobatic area?
The waivered aerobatic area is outlined on the map below, but essentially the area overlays the valley between the town of Santa Paula and the I-5 Freeway at Magic Mountain, from the foothills to the North to the foothills to the South. For exact coordinates, see the Special Notices section of a current Airport/Facilities Directory (AFD).

What are the altitudes specified in the waiver?
Waivered aerobatic activity is confined to the block of altitude beginning at 1500 feet AGL up to 5500 feet MSL.

Can anyone use the aerobatic area?
Yes and no: anyone can fly in and through the waivered area; however, ONLY THOSE PILOTS AND AIRPLANES specifically authorized by, and adhering to the provisions of, a waiver issued by the Van Nuys FSDO can perform aerobatics legally in the valley East of Santa Paula. Any pilot performing aerobatics in the valley East of Santa Paula who is not attached to a current waiver would be in violation of FAR 91.303(d), among others.

How can I tell if the aerobatic area is active?
1. If it’s day VFR, assume aerobatic flight is in progress in the waivered area.
2. Contact Point Mugu Approach on 124.7 and ask if the area is active.
3.Pilots in aircraft with radios are encouraged to monitor 122.775 when transitioning through the valley. Simply transmit in the blind, “Santa Paula Aerobatic Area, is anyone out here today?” or something similar.

How can I minimize the risk of a close encounter with an aerobatic airplane in the area?
1. Look outside!
2. Assume the area is active at all times.
3. Avoid flying straight down the center of the valley at 3,000 feet MSL — most of the aerobatic activity occurs between 2,000 and 4,500 feet MSL between Santa Paula and Fillmore, though aerobatic pilots from Van Nuys typically fly over the Magic Mountain/Newhall area. Local aerobatic pilots also tend to divide the practice area into two parts: North of the 126 Freeway and South of the 126 Freeway.

All things being equal and whenever conditions make it safe to do so, the best plan would be to fly right over the top of the freeway or along the foothills on either side of the valley.

How many aerobatic airplanes might be in the waivered area at any one time?
Particularly during the weekends in the summer months, it’s possible for the area to have as many as three or four airplanes performing aerobatics pursuant to a waiver at the same time! Again, keep your head on a swivel and monitor 122.775 if you can.

Other Airport Businesses & Local Things to Do

Tell them Rich sent you!

SZP Museum
Dedicated to educating the public about aviation in general and Santa Paula in particular.

CP Aviation
Primary through Advanced flight training and airplane maintenance under one roof.

Visit the Santa Paula Murals
A walking tour of nine murals that tell the story of Santa Paula. Two of the murals were created by Santa Paula Airport’s own Wendell Dowling and feature aviation an other transportation themes.