At last we bought a Super Decathlon. Quite a while ago my wife, Jan, and I had decided that someday owning a Decathlon made sense from a business as well as a personal standpoint. We imagined wintering in Santa Paula, CA and flying to McCall, ID for the summers. Of course, I’d continue to instruct from CP Aviation using their airplanes at Santa Paula Airport (SZP) during the winter months, but I’d use our Decathlon to instruct from Cascade (U70) and McCall (MYL) Airports during the summer months. 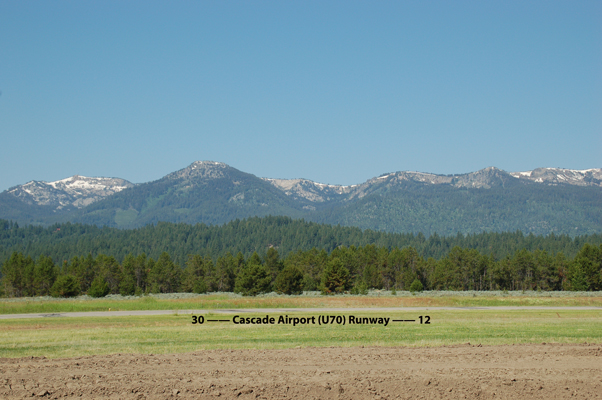 A Decathlon would allow us to travel to Idaho in half the time it currently takes to drive. An Idaho-based Decathlon would also give us access to other airports in the Pacific Northwest for summer training clinics. And since the majority of pilots I fly with travel from somewhere else, the logistics would be nearly identical at both locations: many students already fly commercially into LAX, BUR, or SBA, rent a car, and drive to Santa Paula. In Idaho, they could fly commercially into Boise, rent a car, and drive to Cascade/McCall. Even the drives from the major airports are comparable, though the drive to McCall is far more scenic as it winds along the Payette River.

We just needed to wait for the right time. Well, the right time finally came; N35BY was the right airplane. But it’s how this mostly Juneau White airplane with its Insignia Red and Maule Blue midlines came into our lives that is the real story here. As I’ve mentioned before, the aviation community is small; shared events, experiences, and airplanes connect those who are in it. Think Six Degrees of Kevin Bacon.

The Hand of Fate

The airplane had drifted in and out of our lives multiple times in the three short years since it rolled off the production line at American Champion Aircraft. Through no fault of its own, 35BY had been linked peripherally to tragedy while at the same time having been central to experiences of pure joy.

35BY was one of several Decathlons ordered by the late, great air show performer and American Champion Aircraft dealer, Bobby Younkin. The airplane bears Younkin’s signature “Bravo Yankee” N-number. Sadly, Younkin and his close friend, Jimmy Franklin, were killed when their airplanes collided during an air show routine in Moose Jaw, Saskatchewan, Canada. The date: July 10, 2005. 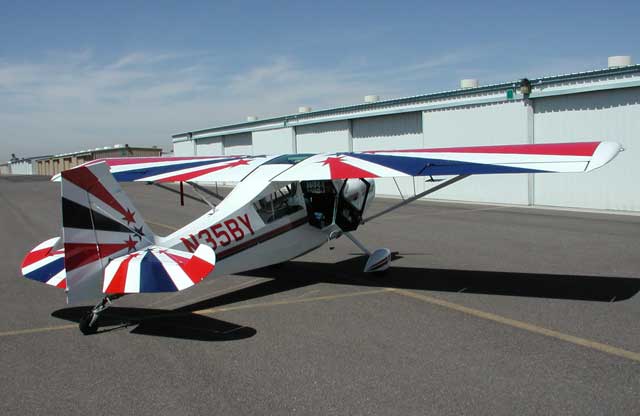 35BY was born three days later. Doug Dullenkopf of Screaming Eagle Aircraft Sales adopted the orphaned bird, and it soon proudly sat on the showroom floor here in Santa Paula. Jan and I would routinely browse Screaming Eagle’s inventory for the fun of it, imagining as pilots do what it would be like if we owned this-or-that airplane. 35BY immediately grabbed our attention. We poured over it, admiring not only the colors, but also the uniqueness of its predominantly white paint scheme (one of CP Aviation’s aerobatic students found this scheme so appealing that she later ordered a new Super Decathlon painted the same way). But we weren’t yet in a position to buy, especially a brand new airplane such as this. All we could do was look and dream.

The airplane didn’t sit at Screaming Eagle for very long. A student pilot from Santa Barbara, CA snapped it up. But this was no ordinary student. 35BY’s new owner had flown as a back seater in the Navy and later became a highly successful entrepreneur. Retired in his forties, the owner wanted to earn his PPL and learn aerobatics. The Decathlon fit the bill perfectly.

On September 7, 2005, I conducted a familiarization flight in 35BY with Max Rosenberg, the pilot who would be the new owner’s primary flight instructor. I’d flown with Max years earlier, giving him a checkout in an Extra 300. Max owns and operates Santa Barbara Aviation from Santa Barbara Airport (SBA). After 36 minutes and five landings, I climbed out of 35BY and the airplane departed for its new home. 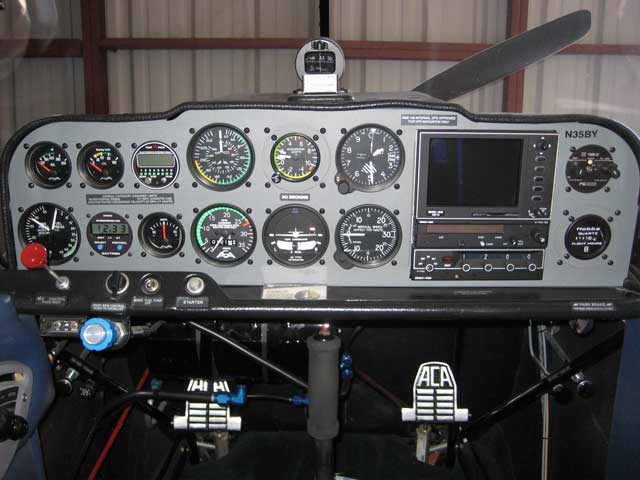 I ended up brokering the sale of two new parachutes to 35BY’s owner as well. Per my recommendations, he purchased Mini Wedge Softies from Para-Phernalia, Inc. The chutes and carry bags arrived with a manufacture date of October 2005.

By March 2006, the owner was itching for some aerobatic training. I spent a day with him in Santa Barbara providing instruction in stalls, loops, aileron rolls, hammerheads, and 1/2 Cuban eights. We logged 3.0 hours with three landings and eight spins. A month later I returned to provide another day of instruction. We focused this time on loops, aileron rolls, normal and aggravated spins, and unusual attitude spin recoveries. We logged 1.9 hours, two landings, and a total of 19 different spins. But two noteworthy events occurred while flying 35BY along the California shoreline west of SBA on this day.

During a spin on the first flight, the engine quit and the prop stopped. Although this is not what you’d call a common occurrence, it does happen. It had happened to me several times already during my career teaching spins. Even so, it was momentarily disconcerting to see the prop freeze in place in the windscreen while spinning toward the Pacific Ocean a few thousand feet below. My job whenever this happens is to get the student to ignore the stopped prop and to remain focused on spin recovery. The priorities: first, stop the spin; second, restart the engine. This the student-owner executed flawlessly. Pressing the starter button once we had returned to level flight post-spin was all it took to restart the engine.

This type of prop stoppage usually results from the idle being set too low. If the hot idle (the idle RPM once the engine has thoroughly warmed up) dips below 600 RPM, then it’s possible to choke off the engine during a spin, especially if the pilot buries the throttle hard against the aft stop. Given the adrenalin and stress of a student’s first few spin entries, it’s easy to hang on tight to the throttle, forcing it hard against the aft stop. I call this particular throttle setting “fright idle.”

By contrast, the second event was one of those transcendent moments we as pilots are occasionally blessed to experience. Everything about the second flight felt right: the drone of the engine, the feel and smell of the airplane, the look of the sky, the taste and texture of the air, the ease of the maneuvers. I remember suddenly becoming acutely aware of my surroundings, marveling at the sensations of flight, the vividness of colors, the slowing of time, the absence of extraneous noise. I had entered the zone.

I remember studying the traffic below as it streamed in both directions on the 101 Freeway as we looped, rolled, and spun. Like worker ants marching between the nest and a bounty of food, the endless lines of cars moved inexorably along, each seemingly focused only on the bumper of the vehicle ahead. I actually felt sorry for them.

Oil platforms miles off shore stood steadfast in the cold, flint blue Pacific. Row after row of waves clawed at the craggy coast. From my perch in the back seat, I witnessed an amazing sight in the shallow, blue-green waters beneath the constantly looping airplane. There, two clearly visible shapes–like gray-green torpedoes–were parked beneath the water’s surface. The great mammals paralleled the shoreline. The skin of the larger was mottled; the smaller, safely positioned between the larger and the shore, instinctively held station. California gray whales, cow and calf, were feeding in the rich kelp beds far below. I looked for the pair each time the nose of 35BY pointed earthward–an untraditional method of whale watching to be sure. This was the last time I flew 35BY from Santa Barbara.

The original owner and his family decided to travel the world on a boat built to their specifications; consequently, 35BY was put up for sale early in 2007. The timing, however, still wasn’t right for us. In March, I was teaching aerobatics to a pilot visiting from New Jersey. She was vacillating between getting something fun like a Decathlon and something more practical like a Piper Archer. I described 35BY to her and mentioned that it was available. A couple of phone calls later, the airplane was on its way to Santa Paula for her to look over.

The airplane arrived as beautiful as ever. My student instantly fell in love with it. But there was a catch: someone else was prepared to make the deal. Snap decisions and finances had to be arranged within hours if she wanted the airplane. Alas, it wasn’t meant to be for her. We tucked 35BY into our hangar for the night (the airplane sure looked good in there!). The next morning, the airplane went to Ray’s Aviation on the field for a pre-buy/annual inspection. Shortly thereafter, 35BY departed Santa Paula yet again, this time heading to Mesa, AZ and completely out of our consciousness. 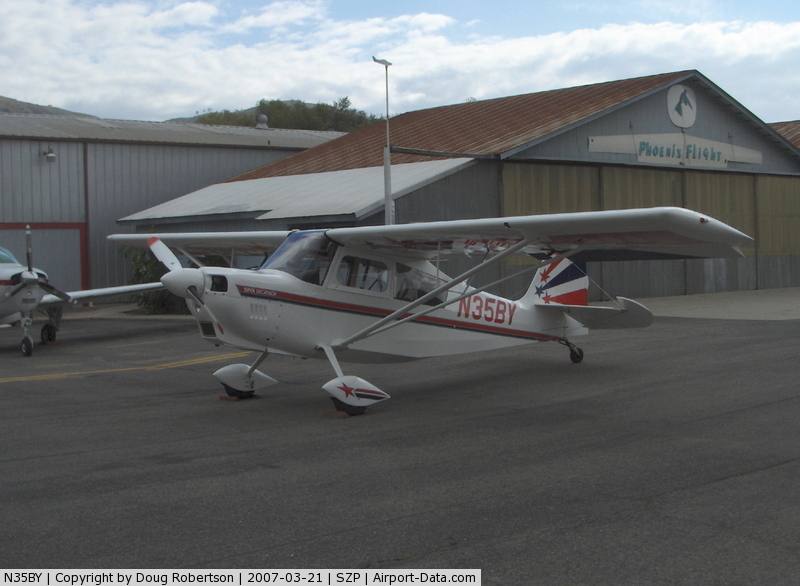 Flash forward 17 months. The time to shop for a Decathlon had arrived. Jan–a master at Internet searches–began looking for our airplane. Trade-A-Plane. Google. Aircraft Shopper Online. Even ebay. No avenue, no possibility was left unexplored. My e-mail Inbox was quickly flooded with prospects forwarded from her. I clicked on a link to Aircraft Shopper Online and up came a text-only list of Decathlons with N-numbers and prices. Scanning the entries, my eyes locked on N35BY. It looked familiar, but from where? Had I flown this airplane? Did I know it somehow?

A quick search through the electronic logbook confirmed my suspicions. Memories of our encounters with 35BY came flooding back. “I’ve flown this airplane,” I said to Jan. “It’s even been in our hangar!” A link took us directly to the airplane’s sales page, complete with pictures.

“We’ve got to get this airplane,” she said without hesitation.

“But it’s more than we’ve budgeted,” I lamented.

“We’ve got to have this airplane,” she repeated, this time with the emphasis and the nuance that only a wife can intone.

Pencil sharpened and price rationalized, I called the owner–a very nice gentleman, a retired Air Force pilot who previously had built and flown a Christen Eagle. A deal was made and we mailed a deposit the next day. We drove the 7-1/2 hours to Falcon Field (FFZ) in Mesa, AZ on September 2, 2008. We were done with the purchase by 5:30 that evening. At approximately 6:45 am the next morning, 35BY and I lifted off from Runway 04R, turning North before heading West to circumnavigate the Phoenix Class B airspace draped overhead.

35BY’s engine never missed a beat during the 3.8-hour flight to Santa Paula (fuel stop: Thermal, CA). The sky was clear and the air was smooth as silk the entire trip. I naturally arrived home ahead of my wife, so it was my responsibility to clean the leading edges as I awaited her arrival by Subaru. Jan pulled up to the hangar just as the last of the bugs were removed. The circle was complete.