Looming more than 10,000 feet high to the Northwest, San Jacinto Peak still sported a splotch of snow; to the South, a persistent plume of smoke marked the not-too-distant border with Mexico. Date trees and pepper fields dominated the local agriculture, while golf courses and gated communities highlighted the affluence of retirees and others who had migrated to warmer climes. And the nearby Chocolate Mountains provided a clear and constant reminder of the power and proximity of the San Andreas Fault.

Yet this was still the desert, with all its browns and its reds and its sand and its daily dust devils and its crystal clear visibility and its heat. Did I mention heat? Even though it was May, the contrast between Thermal now and Corvallis just a week earlier couldn’t have been more striking. The lowest low here: 61 degrees F. The highest high: 109 degrees. The mercury hovered between 105 and 109 degrees each of the four days on-site (all of Southern California was in the grip of an early heat wave, so at least the misery was widely shared). 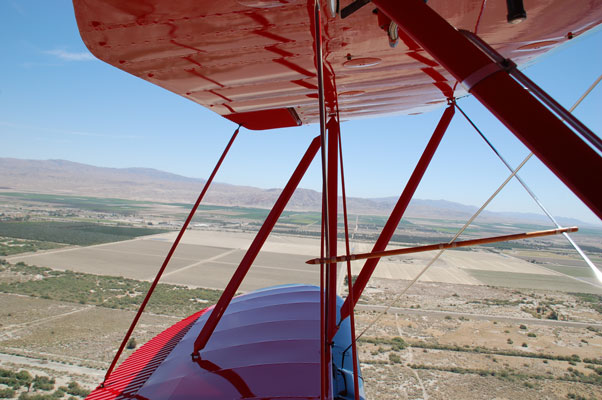 Not even flying open cockpit in the Waco provided relief. The front cockpit was further soaked by heat from the 1942 Jacobs 755R radial engine, which more than offset any cooling effect from the 80 mph air swirling around in flight. We pressed on nonetheless. I was here to fly with Scott Silver, former Navy surgeon, retired lung transplant specialist, and now full-time airport bum with a penchant for Mexican dives, which were plentiful along State Route 86 between Thermal and Indio. I must say that the food was good—the harp-wielding Mariachis on Friday night, however, we all could have done without…

Scott and I alternated between his beautiful red 1991 YMF-5C Super Waco, which he purchased from Rare Aircraft, and his 2007 American Champion 7GCBC Citabria. We stalled, spun, looped, and rolled both airplanes, performed unusual attitude recoveries from botched maneuvers, and spent some time working in the traffic pattern. In between flights we cooled off inside Thermal Aviation, the local FBO run by Rafael Sierra, who also doubles as the President of the Palm Spring’s Pilots Association.

I took a refreshing dip in the pool at the Best Western Date Tree Hotel one evening, and another in Scott’s pool as part of a lovely barbequed steak dinner with him and his gracious wife, Kate, another evening. (The swims reminded me of the previous May in the indoor pool at Cragun’s Resort in Brainerd, MN. I was there to speak during a joint conference of the International Association of Natural Resource Pilots and the MN Seaplane Pilots Association. A free-floating dunker was made available for underwater egress training as well, which was highly educational for everyone who participated. We all got a healthy shot of water up the nose as part of the experience! Contrary to what you might think, and provided you remain calm and focus on the egress procedure, you only needed to be able to hold your breath for a total of about 8-10 seconds.)

While in Thermal, I received an e-mail from Joe Cabuk, a retired Air Force fighter pilot/instructor who is now the Director of Flight Ops for Monroe Air Center in Louisiana. Joe was responding to a series of articles I wrote in the March, April, and May issues of Aviation Safety magazine (Part I: The Problem with Flight Training, Part II: Safer Maneuvering, Part III: The Problem with Flight Instruction). In a series with a combined 7,000 or so words, Joe took umbrage with my use of the word “always” in the context that pilots would be better served if they would “always pitch for the speed they need.”

Normally I wouldn’t have responded to yet another invitation to joust over the roles of pitch and power. Rarely will either side in such a debate be swayed to change position, yet I was compelled to respond. And I’m glad I did! The result was a series of e-mails in which we presented our points of view on the issue. Along the way, we also got to know a little bit about each other, and although Joe and I have not met—we haven’t even spoken for that matter—we respect each other and look forward perhaps to one day swapping stories over a cold beer. I’m convinced that Joe Cabuk is a good man and a conscientious instructor; we just disagree on how best to teach our students about pitch and power.