Part I laid out the key stats for the busy-yet-typical time frame of April 11 to June 6, 2008. Now I’ll describe some of the highlights of the business trips I took during that period. Though accurate, “business” sounds so formal, doesn’t it? Especially when you consider the objective: fly some cool airplanes, with interesting people, in their own back yards:

It seemed like this was the umpteenth time that the Aerobatic Company & Flight School had cajoled me into conducting a training clinic from their facility at Reno-Stead. Stead is about a dozen miles NW of downtown Reno; the school occupies a hangar behind Section A of the permanent bleachers erected near midfield along Runway 8-26. 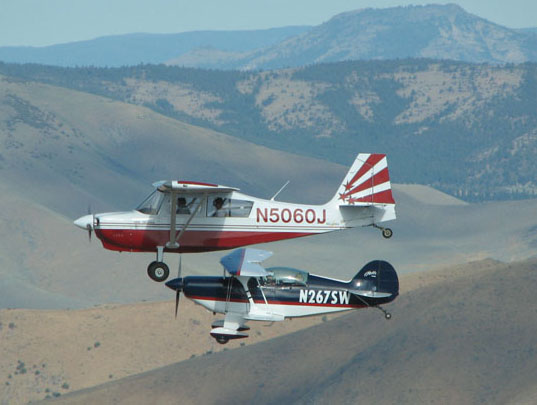 People talk about how hot it gets in Reno. Oddly, I’ve not experienced that heat in all the times I’ve traveled there. Cold, snow, and wind certainly. But heat? No. This trip was no different: the low was 34 degrees F; the high reached 71 degrees F (that was on the day I headed home of course). And when you’re sitting in an unheated Pitts S-2B all day long at 9,000 feet MSL, it’s cold! I was prepared, however: thermal long johns, long-sleeve turtlenecks, flight suit, flying gloves, and a vest kept the cold (mostly) at bay.

I reached Stead just after noon on a Tuesday and was greeted by the usual strong, gusty crosswinds. Even so, we still put up a few flights. The second day, though, we were grounded as the wind reached 50 mph and was nowhere close to being aligned with any of the runways. Huddling around a kerosene space heater, we were convinced that the massive bi-fold hangar door was going to be blown in, so we moved the airplanes as far back into the corners as possible and called it a day. That lost day, however, didn’t prevent us from reaching the key objectives of the clinic: recurrent spin, aerobatic, and pattern work in the Pitts for some pilots, a Primary Smooth Achievement Award for one pilot, an Intermediate Smooth Achievement Award for another pilot, and two more of the Unlimited Smooth Achievement Award maneuvers checked off the list for flight school owner/operator, Tim Brill. Tim has been steadily chipping away at the various Smooth Achievement Awards for a long time. Last year we finally completed the Advanced Smooth Award requirements. This year we dispatched the one-turn inverted spin (entered from inverted, with a push out to inverted when done) and the “push up to vertical, 1/2 roll, hammerhead, pull out” off of the Unlimited list.

What really made this year’s clinic memorable, though, was the magnitude 4.7 earthquake that rocked and rolled Reno at 11:40 PM on Friday, April 25. Centered six miles to the West, the temblor woke me (and many others) up from an otherwise sound sleep. At first I thought I was dreaming about all of the Pitts landings that day–if you’ve ever landed in a Pitts, you appreciate all of the thumping, bumping, bobbing, and weaving that are part of the Pitts Landing Dance. This is further magnified at Stead by the abnormally wide and deep expansion joints gouged into the runways and taxiways at regular intervals. But as the haze of sleep dissolved into full consciousness, I realized that I was in bed! I’d rather have been in the Pitts; at least there you have some control over the undulating compared to none whatsoever during an earthquake. This wasn’t the first earthquake I’ve ridden through; after all, I do call California home. This one was tamer than the 6.7 Northridge Quake of 1994, centered about 35 air miles SE of Santa Paula.

The weather in Corvallis in May was cool and overcast. The fields were lush and green; the surrounding mountains, obscured. Eighty-five miles SSW of Portland, Corvallis is home to Oregon State University. It definitely has that college town feel–young, hip, vibrant. And for a town of just under 50,000 people, Corvallis has a variety of pretty good eateries (flying and food sure seem to go together, don’t they?): Vietnamese for lunch on day one, Japanese Bento Box on day two, and “sustainable fine dining” on day three.

Sustainable fine dining. That meant a trip to Fireworks, a green restaurant located on the same plot of land as the First Alternative Natural Foods Cooperative. “Hippieville!” And I don’t mean that in a derogatory way, just a descriptive one. I know what some of you are thinking, but hey, the food, the atmosphere, the service, even the local artwork adorning the walls (colorful and new-agey as it was, replete with archetypal symbology) made for a deliciously fun lunchtime outing after a morning flying the Yak. Our waitress also happened to be a dead ringer for Lisa Edelstein (our waitress a younger version), who plays Dr. Cuddy on the TV medical drama, House.

McMenamins Pub became the place of choice for two out of the three dinners in town. And why not? Crackling fireplace, quaint bar, decent food, and microbrew ales on tap. The fact that their top selling beer is named “Hammerhead Ale” didn’t influence us one bit … well, maybe it influenced us a little. 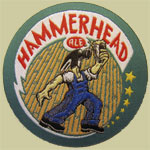 Oh right, the flying: The main purpose of the trip, of course, was to fly the 360 hp, Yakolev-54, Russian Thunder with its new owner, Jim Bourke. Jim has been involved in aviation all of his life, making his mark in the world of radio controlled aircraft. Jim owns RCGroups.com, promoted as “the most active R/C Community on the Internet.” His blog not only describes some of the work we did in the Yak, but also Jim’s pre-Yak training, some of which he did with me in Santa Paula several months prior to the Corvallis trip. Jim is also heavily involved with Knife Edge Software, makers of Real Flight R/C Flight Simulator. (I tried my hand at flying Russian Thunder using Real Flight G4 on Jim’s work computer. An R/C’er I’m not–it was hopeless! A perfect opportunity for one who’s all thumbs anyway, but I still couldn’t hack it. Jim really enjoyed watching me ball up the airplane time after time…)

This was my first experience flying behind the 360 hp Vedeneyev radial engine. True to form, the low growl of that bulletproof engine never faltered as it steadily pulled us through the air no matter what we were doing. The airplane was a joy to fly and extremely agile in roll. The -54 behaved perfectly normally in every way as well: stalls, spins, slips, loops, hammerheads, aggravated spins, inverted spins, landings, etc. Every way but one that is. 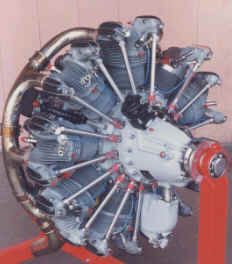 Jim had described an interesting negative dihedral effect that we experimented with: from level flight and while holding the stick centered in the cockpit throughout, we could smoothly apply full left rudder and the airplane would execute a rather nice full roll to the right! We could likewise feed in right rudder and roll all the way around to the left. And had a competition aerobatics judge been watching from the ground, these rolls would have scored 8.0 or 8.5 out of a perfect 10. Amazing!

Yet flying Russian Thunder was a bittersweet experience. I had known the previous owner, air show pilot Eric Beard. Sadly, Eric was killed while hauling freight into Skagit Regional Airport (KBVS) in January 2006. It’s a small world; it’s an even smaller world in aviation. I first met Eric in the early 1990s when he was part of a new formation aerobatic team known as the AcroFlyers. The team used two Pitts S-2B’s. They also wanted to provide Emergency Maneuver Training (EMT) in between air show gigs, so I was hired to teach Eric’s partner and another instructor how to teach the EMT Program themselves. On a later trip to Washington, I even stayed at Eric’s home for a week as a guest instructor flying the AcroFlyers Pitts from Galvin Flying Service at Boeing Field. A month before the accident, Eric and I had a chance to catch up at the International Council of Air Shows (ICAS) Convention in Orlando, FL, where I had been invited to speak about safety in the air show environment. Eric was an enthusiastic ambassador for general aviation, and his untimely passing is a reminder to us all of the ever-present and ever-changing risks that are a part of flying.

The next post will highlight the trip to Thermal, CA to fly the Waco in 100+ degree heat. Until then, be safe…