This is the inaugural post to my blog, so I figured I’d start by recounting some of the recent goings-on in my life as a full-time flight instructor.

I completely and utterly surrendered myself to aviation about 1,080 weeks ago. Many would consider the path I’ve followed to be an unorthodox one—I guess you could call it “the airway less traveled.” And although eight weeks represents less than one percent of the time since I became immersed in the world of aviation, this recent eight-week period nevertheless typifies what I’ve been doing to avoid having to get a real job! 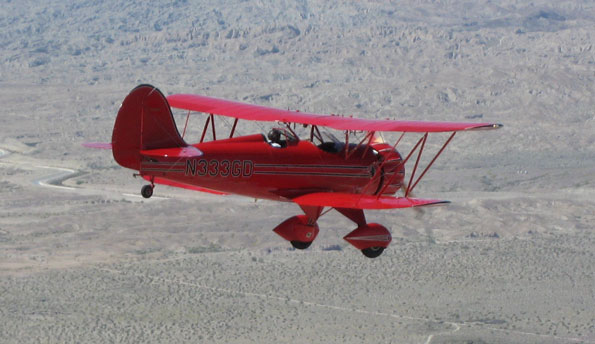 *Note on Micco SP-26A, N585SK: To date, I’ve performed spins in 183 different, spins-approved airplanes (I’m not a test pilot, and since I don’t routinely stay at a Holiday Inn, I’ll only spin airplanes that are approved for intentional spins). While every airplane has its own personality when it spins, certification requirements tend to result in spins-approved airplanes that display similar behavior. “Similar” meaning “falling somewhere within the bell curve of expected spin behavior.” The Micco’s spin is certainly consistent with this, though I would consider it’s behavior being closer to one end of the bell curve: the airplane oscillates rather dramatically as it rotates!

Tom Nagorski, who operates Paragon Air Adventures in Belgrade, MT, flew the airplane to Santa Paula for a week of training in it. We spun the bird one, three, and five turns left and right. The rate of rotation was at the slow end of the spectrum, yet at each half turn, the airplane would roll practically to wings-level, pause there, and then roll back into a classic rotation. It did this consistently through three turns; beyond that, however, and even though the airplane continued to oscillate, the spin began to transition into a spiral. Recovery from the spins for our weight and balance was always prompt.

Provided training to 27 pilots from very diverse backgrounds, with experience ranging from a Student with less than 100 hours of flight time, to an ATP with multiple tens of thousands of hours, including:

Two flights during this period had “issues” that were handled without further incident: 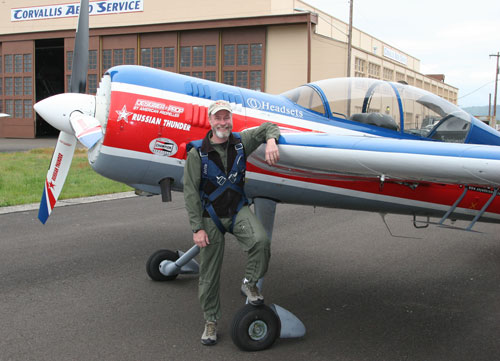 My business card lists “Author—Master Instructor—Speaker” below my name. In addition to the flying, I kept busy during these eight weeks with various other aviation-related activities as well. This included a dozen Internet posts, split between AOPA Forums and Uncontrolled Airspace Forums.

I also received an invitation from Master Instructor and host Russ Still to join his web-based Gold Seal Live Aviation Talk Radio team. Russ wanted me to provide one- to three-minute audio flying tips. The tips would run during live broadcasts and then be available for playback on their web site thereafter. In exchange for providing the tips, a banner ad linked to my own web site would appear during the broadcasts. The recordings would then be archived on a separate web page entitled, Flying Tips from Rich Stowell.

So I purchased a Samson Q1U USB microphone from Amazon.com per Russ’ recommendation and began playing around with it using GarageBand on my Mac. Similar to aviation programs I had worked on in the past, I needed to script about 150 words per minute of audio. The result was the scripting and recording of three Flying Tips, the first of which aired on May 29.

Giving back to the aviation community is also an important activity for me. In fact, pro bono service is one of the four categories needed to qualify for the Master Instructor Designation Program. Ten percent of the flight time logged with other pilots during the eight weeks, for instance, was pro bono.

I also contribute pro bono articles on a semi-regular basis to the International Aerobatic Club’s (IAC) Sport Aerobatics magazine. Since the deadline for the final installment in a four-part series about the Primary Smooth Achievement Awards Program was looming, I devoted some time to finishing the article. I voluntarily serve on the Board of Review (the sole member on the aerobatic side, in fact) for the new Aerobatic Instructor Designation Program administered by the IAC, too. During the eight-week period, I received, reviewed, and approved four applications: two for the CFI-Aerobatic designation; two for the Master CFI-Aerobatic designation.

The Ventura County Chapter of the Ninety-Nines has been putting on a popular and successful series of Pilot Proficiency Classes in our area for several years now. In addition to presenting one of the classes back in February, I and about 100 others attended a class presented by Barry Schiff in late April. The subject: “The Nuances of Mountain Flying.”

It was an aviation-packed eight weeks indeed! And it now looks like I need to add “occasional blogger” to my to-do list. In Part II, I’ll write about the trips to Reno, NV to fly a Pitts S-2B, Corvallis, OR to fly the Yak-54, and Thermal, CA to fly the Waco and Citabria.

Until next time, be safe…